Things are going better for milk, Britain’s bakers are boosting butter and cheese has a smile on its face 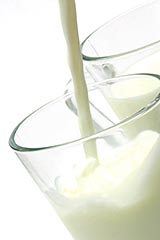 ARE these unusually good times for milk? For many years sales appeared to be struggling in several milk categories. Indeed in the last couple of years there has been a concerted effort to try to kickstart milk consumption among some key demographic groups, including teenagers.

But latest figures quoted by the Dairy industry information and management advisory body DairyCo, using findings from Kantar Worldpanel, paints a fairly positive picture for milk sales.
Total GB market value continues to show growth, with both volume increases and higher prices being paid.
And the reasons for the growth look healthy for milk producers and retailers alike. DairyCo said the figures showed volume growth had been driven by there being more households who were purchasing milk but also by more milk being more being bought by the average household.
In early January 2014 in comparison to the same period the year earlier, average prices for milk had increased by 1.3%.
Pasteurised milk, the mainstream milk that includes big sellers like standard semi-skimmed, increased its market share in value and in volume terms in the most recent quarter, the DairyCo website reported. That appeared to be at the expense of more specialised types such as filtered. The website suggested that higher prices for filtered milk meant a smaller proportion of buyers were choosing it. Volume sales of filtered milk had fallen 5.8% compared to previous year levels.

UHT milk, which takes around 5-6% of the market, also saw volumes and value decrease over the year. The higher average prices failed to make up for lost volume sales, the report said, as both the proportion of households and the frequency of purchase fell for UHT.
Mainstream cheese sales also seemed to do well in the year to early January, once again it looked as if producers and retailers should have been benefitting.
DairyCo said the Kantar Worldpanel figures showed cheese volume sales had increased by 1.2% to 419,877 tonnes in the 52 weeks to 5 January 2014. Just short of 99% of all GB households had purchased cheese at some time over the year. Volume growth, which delivered extra sales of 4,970 tonnes, had come from people purchasing more cheese per shop visit. The average purchase was 0.46kg (almost exactly 1lb in old money) of cheese per trip. The average price of cheese is currently £6.57 per kg, an increase of 1.2% on the year, which had helped increase total expenditure by 2.4% year on year, which took it to £2.76 bn.
• Scottish dairy firm Graham’s The Family Dairy says latest research from Kantar Worldpanel, for the 52 weeks ending 5th January 2014, show its block butter has become the fastest growing butter brand in Scotland.
The data shows Graham’s sales share more than doubled for the 52 weeks ending 5 January 2014 from 4.7% to 10.2%. The sales figures are also reflected in market value share which increased from 5.1% to 9.3%, which the firm says pushes it much closer than before in Scotland to Lurpak, said to be on 13.7%.

• Giant cheese brand Cathedral City says it’s aiming to “rejuvenate the spreadable category” by its launch of Cathedral City Spreadable, which took place this January.
Brand owner Dairy Crest is upbeat about spreads, saying the total spreadable Cheese market, excluding soft white cheese, is now worth £139m and the category is in value and volume growth (of 1% and 1.5% respectively).
The launch will be supported by more than £1.3m worth of advertising support, which will include TV ads.
• Kerrygold has launched Kerrygold Unsalted block butter into what it sees as a “thriving market”.
The new product is a response to increased consumer interest in home baking, which has been influenced by cookery shows such as The Great British Bake Off, said brand owner Adams Foods.
It sees the unsalted block butter market in Britain as currently worth £84m with growth of 10.1%.
The number of consumers purchasing unsalted butter is said to have increased by 5.2%, with the frequency of purchase up 9.3% from 4.0 times per year to 4.4 times per year. The average volume bought by purchasers also increased – by 10.7%.
• According to Steve Gregory, head of category management at Bel UK, there’s plenty for convenience retailers to be optimistic about when it comes to the cheese in 2014.
He says consumption of several different types of cheese is growing, there’s exciting new product development on the way and cheese manufacturers are supporting their brands.
In the UK, cheese is a £2.69bn category, that has shown 18% growth over the last five years. The average cheese shopper spends more than £100 a year on cheese but there’s still room for growth because Brits don’t eat as much cheese as other Europeans, he said.
In 2014 it aims to encourage c-store operators to experiment with an extended cheese range and it plans significant activity on its main cheese brands, which include Babybel, The Laughing Cow, Leerdammer, Boursin and Port Salut.