11 years ago Polbeth Service Station joined Spar. The constantly improving owners have refitted, tweaked and renewed the store several times since then.

DRIVERS in urgent need of fuel, a smartphone battery charge and a top-quality coffee, and local residents in the West Lothian communities around Polbeth, West Calder and Livingston got an early Christmas present when the Spar store at Polbeth Filling station completed its latest refit in December.

And the word ‘latest’ is important. The project, which saw brothers and partners Denis and William McCormack significantly enlarge and improve the store, working closely with Scotland’s Spar supplier CJ Lang, is just the most recent in a long series of works that they’ve carried out since the family began running the site some 32 years ago.
Two years ago the business ploughed tens of thousands of pounds into revamping the filling station area, at a time when many commentators were highlighting the extremely tough market facing independent petrol dealers throughout the UK.
Four years before that they had carried out a significant refit to the store. And between the major jobs there have been several significant tweaks to systems and equipment.
“We don’t like to sit around for too long and we don’t sit on the fence,” Denis told Scottish Grocer.
And that shows in the business’s history. The two brothers run the outlet – though their parents were involved and their mum, who cut the ribbon at the opening ceremony that followed the most recent refit, still uses the store.
At the centre of Polbeth, which is close to West Calder, Livingston and Bathgate, it sits at the heart of what was known as Silicon Glen an area which, in the late years of last century, had the highest concentration of high-tech industries in Europe; thousands of people built computers and other equipment. Sadly that golden period didn’t last. Technology industry slumps and lower-wage competition from other parts of Europe saw many of the jobs disappear.
But during the busy years, Denis explained, they were involved in manufacturing, including items for the high-tech companies. And that seems to show through to this day. The brothers can turn their hands to many practical jobs and carried out a fair bit of the work involved in the latest refit themselves.
And Denis admits to being a bit of a gadget nut, rarely without the latest phone or tablet device and comfortable around computers. He’s also a keen digital photographer. And he holds a pilot’s licence – flying light aircraft and helicopters.

The business’s substantial investment two years ago saw it install a modern system of fuel dispensers.
It now has five pumps, including four configured in the normal rows under the main canopy and another, in its own space, which can efficiently serve vans and trucks. The five pumps have a total of 26 outlets delivering unleaded, super unleaded and diesel fuels.
Denis’s son runs his own foam wash and car valeting service at the site, too.
There’s no doubt that the market for independent petrol dealers has been difficult in recent years, Denis acknowledged.
But more recently things have been a bit better, he said.
When they had invested in the petrol pumps they also moved fuel supplier from Shell to BP. At that time a nearby company-owned Shell site had been competing with, matching or even beating ultra-low supermarket prices on fuel. He didn’t have that option but he reckoned it made it look to his customers that the business was cashing in, charging higher prices for something they could get cheaper nearby.
More recently, however fuel prices generally have come down and have been a bit more stable. And, while he sees it as still impossible to compete on cost with the supermarkets, the overall pressure isn’t quite so great.
But he still watches oil prices and trends and currency exchange rates every day. High prices are bad for petrol dealers, he said, and in more ways than one.
“People buy less fuel. They also think you’re making loads of money. But cash margins are no higher and it has a bad effect on cash flow.”
And he has also noted that some customers including some keen motorists are beginning to wonder just how supermarket fuel can be so cheap. There are many online discussion groups where it is suggested that supermarket fuel is the most basic available and lacks mileage boosting and engine-friendly additives. It’s still a debate but he’s noticed that at least some car fans go out of their way to buy official fuel brand petrol and diesel.
However, Denis is very clear that not everyone who visits Polbeth is there for the fuel. Over the years the store has become increasingly important to the business and last December’s refit was intended to address some specific issues and to ensure the unit appealed and served a variety of different audiences.

There’s been a shop on the site for around 30 of the 32 years that the brothers have been there. It started as a non-affiliated independent classic filling station shop. Before long, the family had added modern shelving and racking which had helped boost sales.
And then came the day, in the Silicon Glen golden period, that Denis said was something of a turning point.
“An American came into the shop and asked if we had any Coke. Well, it was there close to the till and I pointed it out.
“But he said ‘Haven’t you got any that’s cold?’
“We didn’t and he left without buying a Coke.
“We looked into it, put in a fridge and the Coke started flying,” he said.
Since that day they’ve been keen to embrace modern retailing practice and thinking.
“I remember when IBM brought out a computer, one of the first PCs. You ran it in those days with a dot-matrix printer. I thought it would be good for the business. But my accountant said no it would be better to stick to the Simplex account books … can you believe it?”
And it was a technological issue that helped the firm choose Spar when the partners decided to take the symbol route around 11 years ago.
CJ Lang could offer electronic ordering through a phone link. It was very convenient for the time but it also cut out a lot of re-entering information and so reduced labour costs.
“We’ve been with CJ Lang and Spar since and I do think they’re the Rolls Royce of symbol groups, we get a lot of back-up, help and advice, they’re here when we want them to be and they provide training.”
And it was team working that included Denis and William, CJ Lang and the Aberdeenshire-based shopfitting firm Cruden that devised and delivered the Polbeth Service Station store’s latest new look.
There were a number of objectives, Denis explained. They wanted the unit to look bright, airy and attractive. They wanted to use modern equipment to control energy costs. They wanted the store to be accessible and easy to shop. And – perhaps the key consideration – they wanted it to serve its two very distinct markets. The first of those is made up of drivers who could be time-pressed and looking to get in and out as quickly as possible or, alternatively, looking to have a quick break or work catch-up session. The second features the many residents who live nearby in a classic area of ‘many chimney pots’.

The decision was taken to create a drivers’ zone – available to all of course but designed to put all the items and services that a 21st-century road warrior could need in close proximity to each other.
So there’s a classic food-to-go chiller as well as hot snack preparation equipment just to the left as customers enter through the new automatic front door. Behind that block is a new and highly popular Costa Coffee vending machine which sits in a specially built fixture that holds cakes and cookies and is designed to complement the Costa equipment’s design and colours. Immediately round the corner from the front door is an area with a counter and seats, which also includes a collection of charging connections for smartphones and tablet devices and a large wall-mounted TV running the BBC News channel.
The idea is that customers can have a coffee and or snack while charging their equipment, doing some work or catching up with the news.
The coffee and snack zone is in a section of the new-look store that was reclaimed from former storage space. And the adjacent front door is actually set at an angle, a clever move that gained a little space that actually looks like a lot more.
The rest of the store is effectively a small supermarket for the local community.
It reflects many of Denis and William’s ideas and preferences. “We’re very pernickity and we visited other stores. There are a lot of good food and drink places out there, some quite high-end like the Marks and Spencer shops,” Denis said.
There’s a lot of CJ Lang in the mix too, an increased emphasis on fresh and chilled foods with fixtures placed close to each other to provide store customers with an easy way to buy everything they need for a meal.

The shop looks very new but as it was refitted only a few years ago the refrigeration is actually a mix of old and existing units including a bank of new double units with doors, which holds chilled drinks as well as meat products and other goods.
Although some chiller units have been re-used they have also been relocated and, as they use remote compressors, that did require some significant rewiring and re-plumbing work.
The wide aisles and low shelving make the shopping experience more pleasant than if things were tighter and Denis has noticed a significant increase in the number of wheelchair users who now use the store.
As well as increased sales of coffee (Denis said the old machine did fairly well but the Costa unit has taken sales to another level) there have been several changes that have helped increase turnover.
A well-positioned double-doored freezer split vertically between bags of ice and premium-positioned frozen desserts has helped increase sales of both.
A gondola-end display area holding baskets of fresh morning goods has, said Denis, helped multiply sales of rolls.
And, at the till, a transparent display box for locally produced fresh cakes and award-winning, local pies from Boghall Butchers, has been a sensational success.
The store participates fully in the Spar promotional programme and the central shelved area includes special bays for items on deal and £1 lines and more.
A 5000 leaflet programme is, said Denis, bringing visitors from beyond the immediate area to the store.
So with the policy of constant improvement in mind, what’s next on the agenda?
Well, perhaps not surprisingly, Denis is thinking of technology.
The current POS system works well and was advanced when it was installed. But Denis is keen to use screens to greater effect. He wants customer-facing screens to show customers how their shopping is stacking up as it is rung through and he’s keen for them to highlight current promos also. The same technology can be used to prompt staff members to upsell items and suggest accompaniments to products being bought.
And outside on the forecourt area but away from the pumps he wants to paint some lines.
More people are coming to do a full shop he explained. They need more designated parking space. 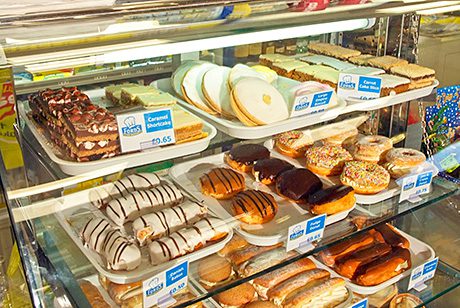