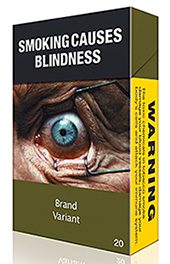 STANDARDISED packaging for tobacco products is once again under active consideration across the UK.

The Scottish Government signalled its intention to proceed with its own legislation after Westminster appeared to postpone a decision until evidence from the Australian experience of plain packs was known. But the Holyrood legislative process would have started from scratch.
However late last year Westminster announced there would be a new review, with a report scheduled for next month, which could lead to implementation of plain packs.
And last month the Scottish Parliament’s Health and Sport Committee gave the go-ahead for a vote at Holyrood on a legislative consent motion (LCM) that would allow plain packs legislation introduced by Westminster to also apply in Scotland.
If the Westminster review recommends introduction of plain packs, standardised packaging might be enforced in 2015.