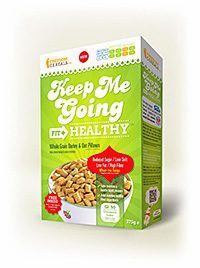 IT’S a month or so into 2014, and for more determined consumers the ‘new year, new you’ efforts could still be on the go.

Freedom Cereals reckons its Keep Me Going, a cereal aimed at health-conscious consumers, should help those who are looking to eat well.
But the company says new government food-labelling guidelines have made it more difficult for consumers to quickly judge a product’s sugar content.
Richard Paterson, joint MD of Freedom Cereals, said: “Previously, foods needed to have a sugar content of over 15% to warrant a red rating in the front-of-pack labelling.
“But in the new system, only foods with over 22.5% sugar will get a red flag.
“This means that several leading breakfast cereals that market themselves as having a healthy profile, but which would have been red-carded under the old system have now achieved an amber by the skin of their teeth.
“With the amber category being so broad – from just 5% to 22.5% sugar content – it’s very confusing for consumers.”
Keep Me Going sits in the amber zone with 8.9% sugar. Freedom says it also contains 0.19% salt, which the company claims is less than a fifth of the amount of salt present in some other cereal brands.
Freedom says the whole-grain barley and oats cereal has a low GI (Glycaemic Index).
The Glycaemic Index is a ranking of foods that contain carbohydrates that is designed to reflect their overall effect on blood glucose levels.
Slowly absorbed foods have a low GI rating, and are said by some to add to the ‘fuller for longer feeling’. Foods that are quickly absorbed have a higher rating.
The company is also marketing the cereal to families. There’s a series of collectable cards, aimed at kids, inside the pack.
Keep Me Going is available now to retailers across the UK from health-food wholesalers, the firm says.