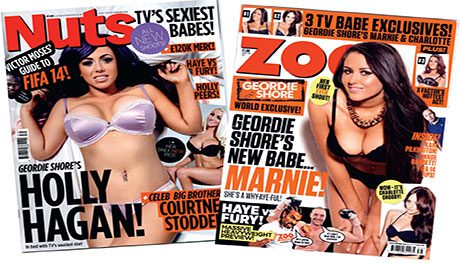 LADS mags Front, Nuts and Zoo are off the shelves at 4,000 stores supplied by the Co-operative Retail Trading Group. Their publishers chose not to supply the magazines in sealed modesty bags by a deadline set by the organisation. The Midweek and Sunday Sport newspapers are also being withdrawn from Co-operative stores.
The move came as a BMRB survey released by Kantar UK Insights showed that the nation is split over lads mags and page-three pin-ups. The poll found that 40% of women think the magazines are degrading to women while another 40% described them as harmless fun. More than half of men thought they were harmless fun and less than a quarter agreed that they were degrading to women.
All the co-operative societies, including the Co-operative Group, had given an ultimatum to the publishers of Front, Loaded, Nuts and Zoo, as well as the two Sport titles, to deliver the publications in bags by the end of July. The co-ops said that Loaded had complied, and so will remain on the stores’ news shelves, but the others had not.
In the BMRB survey, 46% of women wanted lads mags sold in modesty bags, with one in five happy for them to stay on the shelves as they are.
Asked whether supermarkets should ditch such titles altogether, 27% of women were in favour with 34% against. Some 45% of men were against a ban.
Scots were pretty evenly split, with 36% of men and women describing them as harmless fun, while 38% thought they were degrading to women. The only region with a higher percentage opposing lads mags was Greater London.
Co-operative Group chief executive Steve Murrells said parents had led the objections in the group’s stores. That ties in with the BMRB results, which found that opposition to page three was higher among parents than among non-parents.
“As a community-based retailer, we have listened to and acted upon the concerns of our customers and members, many of whom said they objected to their children being able to see overt sexual images in our stores,” Murrells said.
“We believe individual, sealed modesty bags are the most effective way of addressing these concerns, so we will no longer be stocking the titles that have failed to meet our request. This action will make our stores more attractive to families with young children by creating a more family-friendly shopping environment.”
The move was welcomed by the campaigning group Child Eyes. Its co-founder Kathy McGuinness said other store chains should follow suit.
The Association of Convenience Stores has a special guide in which it advises its members to “take particular care to ensure men’s lifestyle magazines are not displayed at or below the eye-level of children”. It recommends: placing the mags well away from children’s titles and comics; keeping them out of the direct sight and reach of children; and, if space is at a minimum, overlapping the covers with other titles.