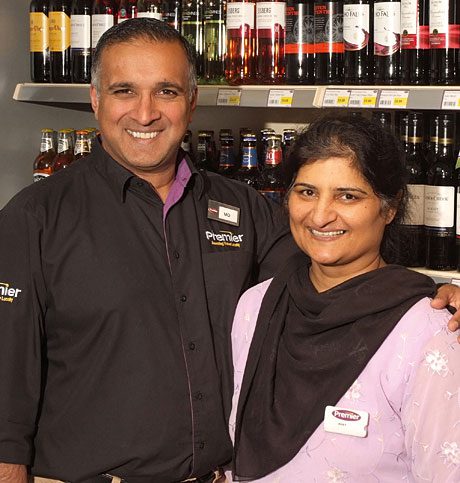 Our winners: Life and Times

Period at store to date: 21 years (store has been in the family for 26 years)

• Shahid was part of a Scottish retail family Rukhsana travelled to Scotland from Pakistan.

• Shahid was given the nickname Mo, after Mo Johnston, by football teammates

• The couple are acknowledged community champions. Shahid runs a local football club for youngsters, and they organise trips and gala days, cooking sessions and more for the community

IT’S not incredibly nice to look at but it symbolises change, improvement and a contribution to a better future … outside Mo’s convenience store in Blantyre in Lanarkshire there’s an upside-down, well-worn, large, red metal bin. At one time it was one of three bins filled twice-weekly with rubbish headed for landfill. Not great for the environment and not good for the bottom line either. If it was still doing that job today each uplift would cost the business £25.
But these days the rubbish for collection is confined to just one load a week and the red bin is planned to play its part in a new community glass recycling facility that store owners Shahid and Rukhsana Razzaq hope to get up and running soon.
The success the store had achieved in dramatically increasing the material it recycled, and diminishing the amount that it trashed, was one reason but certainly not the only one that Mo’s Convenience Store, which runs under the Premier fascia, was named Scottish Grocer’s Sustainable Retailer of the Year – an award presented in association with Zero Waste Scotland.
When the award judges visited they were hugely impressed not just by the progress made on recycling but also by the business’s remarkably innovative approach to sustainability in general.

So how did Mo’s get into sustainability in such a big way?
Well it’s a store that is truly at the heart of the community, known and awarded for its remarkable work in supporting its local area and its people. In many ways, doing the right thing comes naturally.
But it is also a very carefully run business so when Zero Waste Scotland ran seminars arguing that sustainable practice could have a distinctly positive effect on profitability Shahid did what he always does, he listened carefully, took notes and made his plans.
“After the ZWS training day we made changes starting with the separation of card and plastic. We aim also to separate glass and cans though we don’t have too much of that, usually only damaged cans or items that staff buy to have on their break,” Shahid said.
“It is quite a lot of work but it is worth it, uplifts were costing £130 a week and would be more today, now it’s £25.”
As in many other things he finds the key to making a recycling scheme work is being systematic and getting the staff on board.
Some aspects of the system are quite straightforward. Areas of the store room are put aside to collect the likes of cardboard and plastic and the message is ‘once you break a pack put it in the right place’.
“But you have to stay on top of it you have to work to get everyone used to it. When they do it right say ‘Well done’ and stress the effect on the business and jobs.”
Avoiding food waste is another area where the store has made major progress.
In part that’s down to the expansion of the food-to-go range.
The shop has successfully developed its own bake-off oven service providing baguettes and other bakery products. Previously wastage was quite difficult to manage. But with the opportunity to put out filled baguettes and baguette pizzas, sandwiches and other lines any excess production now has another use. And salad goods which are in date but still there when new stock arrives can also be used in the store’s prepared salad bowls. It has virtually wiped out fresh food waste, has increased margins and it makes healthy-option, convenient food available too.
If any canned goods are becoming short-dated they are given away to regular customers.
“It has a double benefit,” Shahid said. “The alternative would be to bin it. If we give it away we avoid the uplift cost and at the same time it creates goodwill.
“Customers appreciate it. It gives a feelgood factor.”
On equipment the store has put in low-energy lighting and fitted timers to lighting and chillers and Mo’s is now trying out some new LED lights.
“It would cost around £2,500 to £3,000 so we’ve brought in samples,” Shahid explained.
So far he’s very pleased with the quality of the light that the LED product provides but he’ll look closely at the numbers before coming to a final decision.
“I source things myself and I do shop around but I also go onto the Premier retailers forum where you can ask for advice and tell other retailers what you’ve found,” he said.
“That’s excellent. It’s not like the old days when everything was a trade secret, we’re helping and advising one another now.”
The Scottish Government has recently announced mandatory charging for carrier bags but Mo’s has had its scheme in place for seven years. It has raised money for a variety of local and national charities. Now it’s used to raise funds for the kids football club that the store founded and developed. That’s tremendously popular, there’s a core squad but the club also has open training sessions that can attract 70 youngsters or more. At 3p a bag the scheme has contributed to the £1100 raised. And it comes in very useful. The Coatshill area is far from wealthy. While people want to help there aren’t many spare cars to carry the team to matches, for example. So among other things the bags scheme funds bus hires and other transport.
But customers don’t have to buy a bag, they can always re-use one which someone else has left in the special box provided close to the till. That sits next to the battery recycling box. And, while many stores are required to offer battery recycling, Mo’s makes sure its box is noticed with specially prepared notices – it takes the principles of point of sale and applies them to recycling.
There’s more to come. The store aims to run a charity clothes collection in October. And if one or two logistic issues can be ironed out the red bin out the back will be turned right way up again and become a bottle bank … reused, for recycling.