John Brodie is chief executive of Scotmid Co-operative. Patrick Duffy spoke to him after the Society released its annual report. 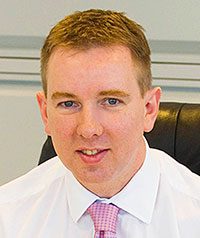 HE could be Scotland’s most important local shopkeeper.

John Brodie, chief executive of Edinburgh-based co-operative retailer Scotmid, is in operational charge of around 190 food stores, which, since the acquisition of chains like Morning Noon and Night and Botterills, can be seen well beyond its traditional east-of-Scotland base.
It’s now a national force. And as Scotmid itself says, the majority of its food units are “food convenience stores situated at the heart of Scottish communities”.
But, of course, there’s more –around 140 Semichem stores in Scotland and in the north of England and Northern Ireland, plus funeral and property divisions too.
Last month we reported on Scotmid’s latest annual results. Turnover was up but profit had slipped back a little. In the year to 26 January 2013 the independent co-op had made £6m profit (down from £6.5m the year before) on sales of £428m, which was a little ahead of the previous year.

BUT the head man said he was happy with that. There were specific reasons for the profit decline, the everyday operation of the business was going well and, in a tough economy, the society’s report card was good.
“All of our four main trading divisions have moved ahead in terms of the year,” he said.
“We had extra pension costs and we had a specific investment in a process project for the long term which added extra cost in. But in the current environment at headline level for all of our trading divisions to be moving ahead, we’ve got to be happy with that.”
But if the most recent return was down a little on the year before it was down a significant amount more on the firm’s recent peak. In 2010 Scotmid delivered a profit figure that broke £10m.
That, he said, was a very special time. Some for reasons that were Scotmid’s and some that had to do with the wider economy.
“Although technically we had the credit crunch in 2008 it didn’t really bite until later for several reasons,” he said.
“We had the reduction in VAT in retail, which helped. Things were more buoyant, particularly our Semichem operation in Northern Ireland – the Irish economy hadn’t imploded at the point.
“I think it was also a year when all of our trading divisions produced exceptional results. So when all of that comes together you get a fantastic set of results.”
In 2012–13 he hadn’t been expecting anything so exceptional but he had been pleased.
“We did have to absorb more costs centrally. But that’s not stores, rents, rates, and personnel.
“This year, especially, it included pension costs – a sizeable number,  and it includes the cost of a one-off process-improvement project, which is effectively an investment.”
The actual trading divisions had also had their special factors, however – some positive, some not.
“We’ve had the benefit of the second year’s growth from the Botterills acquisition,” he explained.
“But we’ve also had to absorb a significant reduction in the corporate dividend we get back from the Co-op group.
“We have the Co-operative Retail Trading Group where the buying is effectively still done by the wholesale society – now part of Co-op Group which is a major retailer in its own right. Because of its reduction in profits last year it reduced the rate of dividend to independents like ourselves.
“When they do well, we get more. I guess you have to take the rough with the smooth in some ways.”
So had improvements in returns from the former Botterills estate been as expected?
“We were anticipating that we would get growth from our range and that’s what happened.
“We had experience of that in other acquisitions previously, or in store conversions. We were expecting that to come through.
“At the same time we faced a significant level of additional competition, particularly in the food business.
“We’ve dealt with that and the Botterills stores have performed well.”
The Scotmid response to increased competition hasn’t been all about price and promotion. In a notable development it began segmenting its stores estate and choosing sites to host its new premium, fresh food-led style of shop. The first two are in Edinburgh, at Warrender Park and Marchmont, but more are on the way.
And it’s been developing a series of relationships with local food suppliers, including established bakers, in many of the areas in which it operates.

THERE’S a very different economy now and lifestyles have changed significantly, Brodie said. And interestingly, as a result, just about the only sector in food retailing to be in now is the food convenience sector.
“That’s very much our heritage. We’re in the right sector because it’s growing but it is one that others are keen to get into.
“The competition threat comes from many different areas – from the major multiples, from the discounters and also from some  very good private operators.”
How has the food-led pilot gone? In particular had the first store to go through the process, Warrender Park, lived up to expectations?
It had, he said. But the society was under no illusions. The Warrender Park style would be for certain sites only.
“Out of our 190 food stores we don’t see it as being at more than 20-odds. But it is part of the segmentation – in the current environment one size doesn’t fit all.
“We also have neighbourhood stores that act as a small supermarket for many and stores where value is important to the customers.
“The common thread is that they are at the heart of their communities.”
But it is intended that the intelligence gained at Warrender Park and the work carried on other initiatives in other stores – like the installation of wifi, Costa coffee-to-go services and local bakery goods – will be put to use across the estate.

THE group uses its data gathering operation to make many of the projects possible. To make way for a Costa unit, for example, you have to lose shelf space.
“That’s part of the information – on what sells and what doesn’t sell – that we now have on our systems,” he said.
“You look carefully at where you have multiple variants, both in terms of packs sizes and in terms of good, better, best.
“Using research with customers we’re now tailoring to what they’re buying and freeing up space to increase the range. And we’re using innovative display fixtures.
“We’ll continue with the store segmentation, we’ll roll out the local bakery proposition, we’ll roll out our increased fresh proposition and very much segment the stores to meet consumer needs. We would want to get to a stage where these things were pretty much across the estate.”
But, for now at least, that estate won’t include cyberspace. The group includes an online operation in its Semichem division –largely because it’s a high street chain and a web presence allows it to reach other customers. But it’s not part of the plan for the Scotmid brand. 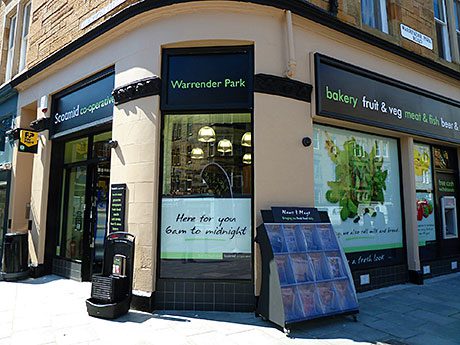 Images – John Brodie, chief executive of Scotmid Co-operative, top. And, pictured above, the Warrender Park Edinburgh unit where Scotmid has trialled its new fresh food-led style of store, which it intends to roll out to around 20 stores in the estate.