CITY retailers Iain Wilson, owner of Nisa Extra in Perth Road, Dundee, and Tahir Ali, a partner at Londis Kelvindale in Glasgow’s Kelvindale Road, Glasgow and town and community retailers like Manny Hussain, owner of the Nisa store and Post Office in Newarthill, and Greenock’s Billy Kay, owner of Spar in the town’s South Street, all agree that consumers are still shopping for extra food and drinks for nights in.

But there are different trends and that means that store owners and operators have to watch closely to make the best of the home-leisure market.
Both Iain and Tahir see shoppers coming in at the weekend to stock up on soft drinks, snacks and alcohol over and above their usual purchases and they’ve seen products like sharing-sized bags and multipacks of crisps become more popular.
Iain has set aside a distinct area of his store for products likely to be picked up for a night at home. And Tahir is planning something very similar.
In Dundee, a gondola-end fixture close to the entrance hosts the big-night-in section, and displays large bottles of soft drinks, multipacks and sharing packs of crisps, boxed and block chocolate, and Country Choice bake-off products.
But it doesn’t stop there. Two-litre bottles of soft drinks, hanging bags of confectionery, and sharing-sized bags of crisps are displayed in additional Coca-Cola and Britvic stands in other parts of the store, and the Barr family of soft drinks was also recently displayed in a special stand.

The stands are designed to give consumers who are staying at home every chance to buy big-night-in treats on impulse
Many of Iain’s customers are students – they account for 20% of store sales. They tend to look for extra soft drinks, alcohol and snacks at the weekend but also on Tuesdays and Wednesdays.
He’s noticed a distinct pattern among his student customers and others.
“Across the board, women tend to impulse shop more than men,” he said.
“If a group of girls come in, you can tell if they’re getting ready for a night in, they’re much more likely to pick up crisps or some chocolate over and above what they planned.”
Men do buy the big-night-in lines but he reckons they’ve planned to do so.
Products picked up on impulse tend to be things like sharing bags of Walkers Sensations and Doritos and jars or tubs of dips, Iain said.
Among planned big-night-in purchases a particular favourite is pizza. There’s a 2.5m chest freezer area dedicated to frozen products, and the Nisa Heritage range of fresh pizzas on a two-for-£5 promotion also sells well.
Alcohol is very often placed in a night-in shopping basket but his student regulars make life a little bit difficult by changing their favourites frequently.
“What was popular last September won’t necessarily be popular this year,” he said.
One thing he has noticed is that his cider sales have picked up recently, with more shoppers going for different flavours of Magners and Bulmers.
With wine, £5 bottles are popular with the girls, so Iain makes sure there’s a good selection at that price. But he doesn’t forget about the people who could be willing to spend £15 on a bottle.
Keeping white and rosé wines chilled also gives the store an advantage over a supermarket, he said.
A specially set aside big-night-in section is in the pipeline at Londis Kelvindale in Glasgow, which will see a major refit soon, said Tahir Ali.
“You can’t help but notice the buying habits of your shoppers and you know when they’re stocking up on things for a big night in,” he explained.
“There are tell-tale signs – sharing bags or multipacks of crisps, dips, sweets, a multipack of beer.
“It tends to be the weekend, a Friday or Saturday night, that they stock up.”
TV schedules, time of year, and the weather all have their effects, he said.
When the X Factor is on, people will be more inclined to opt for a night in, and they’re also more likely to stay in in the run up to Christmas, Tahir explained.
Does he see any big differences between male and female big-night-in shoppers?
“If there’s a football match on, guys will come in and stock up on beer,” he said.
“Guys also tend to go for the multipacks and sharing bags of crisps. The Walkers Sensations £1 sharing bag and Doritos always do well.
“Ladies tend to go for wine, usually rosé wine. They’re more inclined to go for hanging bags of chocolate, like the Nestlé and Cadbury bags. They also like the One Pounders Golden Casket bags, and will sometimes pick up two or three of those at a time.”
The store has a range of Doritos ambient dips which do well, as does the Delphi range of dips like guacamole, houmous and tzatziki, and the Primula range sells well too.

The most popular meal is pizza, even more so when it links up with soft drinks.
The store recently ran a Londis Perfect Partners promotion which linked a 1.25l bottle of Diet Coke with a Londis Super Value pizza for a set price of £3.
“It worked well and is the kind of thing we would really like to do again,” he said.
“Shoppers saw the promotion and picked up the pizza and juice but they would also pick up things like garlic bread too.”
Alcohol is a big part of the big night in too, but the overriding factor in choosing alcohol seems to be price, said Tahir.
The search for value is top priority for shoppers in both Nisa in Newarthill and Spar in Greenock, and that’s had an impact on their attitudes towards the big night in.
Manny Hussain, owner of Nisa and Post Office in Newarthill, says his shoppers are still up for a special night at home, but they want to see products on promotion.
In Greenock Billy Kay, reckons, the “big night in” is a misnomer. Every night is a night in for his shoppers as they save money wherever they can.
Manny offers deals and promotions on soft drinks, crisps and snacks from a special big-night-in area, which sits in one of the busiest areas of the store, close to the post office counter and the alcohol section.

“It’s definitely becoming more popular,” he said.
Buying multipacks or sharing packs of crisps and two-litre bottles of soft drinks and alcohol are all popular with Newarthill’s big-night-in shoppers
But on alcohol many of his shoppers want value.
Budweiser sells well whatever the price point, he said. Tennent’s and Carling are average sellers, but do much better when they’re on promotion.
Price-marked multipacks are the real winner, he said. Four-pack PMPs of beers like McEwan’s Export, Red Stripe and Holsten Pils are very popular, selling around two or three cases a week, Manny said. But when they’re not price-marked he finds it hard to sell them.
Saving money is top priority for Billy Kay’s customers
The store has never had a designated big-night-in section, but products for the big-night-in sell well
“It’s not a special thing anymore,” he said. “People are staying in all the time now because they can’t afford to go out anymore. 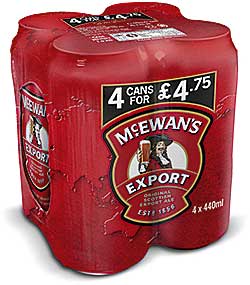 “It’s different in other areas but that’s what it’s like in Greenock.
So he highlights the store’s promotions. Offers like Doritos down from £2.39 to £1.50, and Quavers or Monster Munch multipacks for £1 sell very well. But it does affect sales of single lines.
“Why would a shopper buy a single bag of crisps for 50p or 60p when they can get a pack for six for £1?,” he asked.
And it’s similar in confectionery. Shoppers much prefer multipacks of three or four Mars bars or Twix for £1 than countlines at 70p or 80p.
Confectionery multipacks do best for Billy but hanging bags are popular too. The store has had the Golden Casket range of bags, now called One Pounders, on shelf for decades, and says the sweets continue to be popular with customers. Shoppers also go for the Spar own-brand range of hanging bags, but sales of hanging bags of the giant brands vary – they’re very much stronger when they are price-promoted.
“People are moving brands to get good value,” he said. And that’s something he also sees in soft drinks.
When shoppers see a two-litre bottle of Pepsi down to £1, and Coca-Cola is priced £2.58, the Coca-Cola at full price doesn’t sell. But once shoppers see Coca-Cola or Diet Coke on offer at two for £3, they go for it.
Customers are also tempted by multipacks of 500ml bottles that are on promotion.
Billy recently had a four-pack of Lucozade on offer at £2 which was a good seller. And he made sure he capitalised on its popularity.
“Once it was off the promo, I put it up to £2.49 and it still sold well, as shoppers could see that price was still £1.50 cheaper than buying bottles individually.”