How our health-promoting champs took the message to local kids 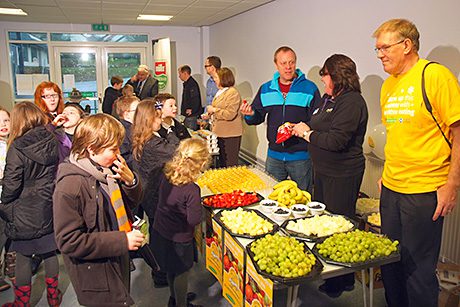 BROADWAY Convenience Store in Edinburgh’s Oxgangs area should know how to do celebrations – it’s one of the most-awarded retail businesses in Britain! But the 21st of last month was particularly special for owners Dennis and Linda Williams, their team and the customers. It was 30 years since Dennis’s family first opened the doors at Oxgangs Broadway.
On the day itself Dennis and Linda laid on a party in the store, for customers, suppliers and supporters – complete with goodie bags, birthday cake and bubbly for the grown-ups, and entertainment for the kids.
But the party wasn’t the whole story. The store put on offers through the week and, in an event that was especially appropriate for the newly chosen Scottish Grocer Health-Promoting Retailer of the Year, it organised a major healthy breakfast event at nearby Pentland Primary School.
With the help of the SGF Healthy Living Programme, suppliers, store staff, school staff and parent volunteers, the aim was to provide some of the healthiest, easily available and accessible breakfast foods to all the children at the large primary school, one of a number of local schools that the store is involved with.
The SGF Healthy Living Programme provided a massive fruit and fruit juice selection designed to give the children a chance to breakfast on some of their fruit favourites and, perhaps, to try something new. It also provided t-shirts and lunchboxes that the kids could pick up after they had completed breakfast.
As part of the project the children had also received visits and talks from nutrition experts in the days leading up to the event.
On the day itself pupils took turns at the special breakfast buffet. Two classes at a time, with the younger children helped by classes of older pupils, made their way round tables that featured: cereals, grain, seeds and berries; healthy bread and toppings; reduced-fat milk, yogurt, fruit and fruit juice. Support came from Booker, Pepsico, Allied Bakeries, Muller Wiseman Dairies and the SGF Healthy Living Programme, among others.
And there was support and gratitude too from local politicians.
Gordon MacDonald, MSP for Edinburgh Pentlands said: “It’s a fantastic initiative. Hopefully we’ll be able to try it in other areas.”
Heather Levy, chair of Firhill Community Council said: “Events like this help address health inequalities in the area.
“It shows you don’t always need a lot of money. It can be a question of attitude.”
And local councillor Elaine Aitken summed up the view of the politicians when she said of Dennis and Linda Williams and the Broadway team: “We’re so lucky to have such community-minded people in the area.” 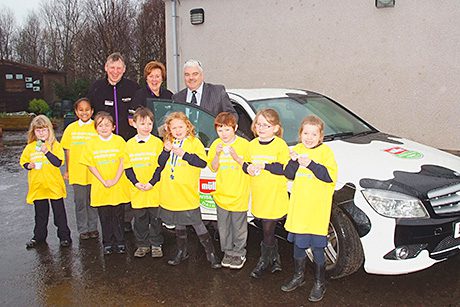 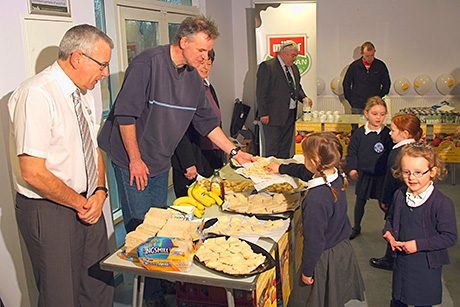