Fashion-conscious consumers are being given the chance to win a prize every day from September right up until Christmas with Kinder Bueno. 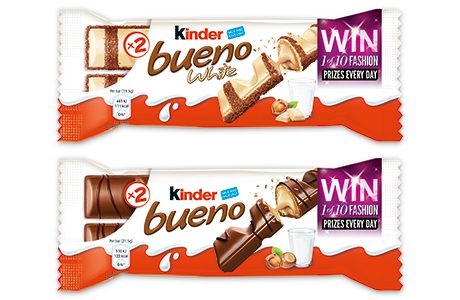 As part of Ferrero’s Christmas push, the brand is offering consumers the chance to win one of 10 daily prizes from High Street fashion stores.

The competition will feature on 19m packs across 13 weeks.

Customer development director Levi Boorer said: “By offering the chance to win a little pleasure every day with our fashion prizes, we aim to appeal to new and existing brand fans alike, encouraging greater trial and increased visibility for the product.”

The promotion will feature on the Classic and White varieties in single and multipack formats and is to be supported with sampling activity, in-store POS and digital promotion.

• The Ferrero Grand Rocher will also make a return in a range of seasonal goods from Ferrero this year.

Boorer said: “Christmas is a vitally important season for retailers.

“Ferrero grew at 24.5% last Christmas adding £12.6m to the category  and we’ll be ramping up our seasonal offering this year with a raft of new seasonal products and a £3.6m marketing investment.”

Boorer added that from the beginning of November Ferrero Rocher will be promoted through TV, video on demand, tailored press activity and  nationwide sampling.