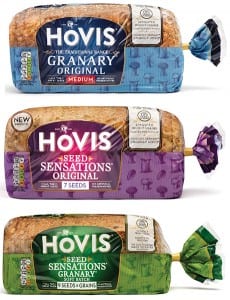 Money off during August is at the heart of the Hovis re-launch campaign for its bread with bits.

It will be running a coupon-on-pack promotion on its Hovis Wholemeal range to give 30p off its Seeded and Granary loaves through the month.

The packing has been redesigned and the campaign will promote what Hovis calls the premium taste and superior ingredients of the range.

Marketing manager Jim McCall said: “This hails the start of a wave of activity to come before the end of 2015.

“Research has found that consumers increasingly want foods that deliver health benefits for themselves and their family, and foods that are perceived as more natural and less processed are high on their list.

“The new look packaging will meet this need by highlighting recipe improvements and claims regarding ingredients on-pack and will create stand out on shelf, supported by a suite of point of sales items for retailers.”

The RRP for Hovis Seeded and Granary ranges is £1.60.