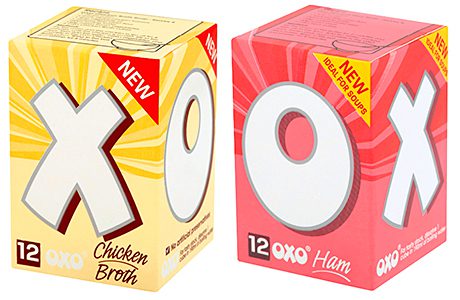 OXO is adding two new flavours to its stock cube range. Aimed at home-cooks, marketing activity will be targeted at those areas where making soup from scratch is particularly popular – including Scotland.

Ham is a completely new variety while new Oxo Chicken Broth is designed to offer a lighter option than the company’s existing Chicken cube.
It’s designed to be used in more delicate dishes such as risotto, as well as in soups.
Helen Touchais, category marketing director for flavourings and seasonings, said: “The launch of Oxo Chicken Broth and Oxo Ham will be supported by a targeted campaign focusing regionally on areas with high home-made soup usage.
“Soup is the biggest occasion for dry stocks and has seen consistent growth over the last five years according to Kantar.”
She said Kantar had found that 23% of chicken stock is currently used to make soup.
“The new Oxo Chicken Broth flavour has been formulated to provide consumers with a lighter flavour profile than regular chicken stock, for use in a wide variety of soups and meals such as risottos.”
The RRP for both varieties is £1.25.