Many football aficionados will be intrigued to view Chile v Australia but let’s face it most fans will be looking out for the big teams. When are the crunch matches? When can you expect the rush?

FIRST things first, Scotland didn’t qualify so retailers and consumers won’t have to deal with our time-honoured tradition of breathless expectation followed by ever-so-noble near miss. But Gordon Strachan is making plans.

• The 2014 tournament kicks off on Thursday 12 June at 9pm UK time with hosts Brazil v Croatia. Scotland beat Croatia home and away in the qualifiers but, sadly, we also made it impossible for ourselves to qualify for the finals. 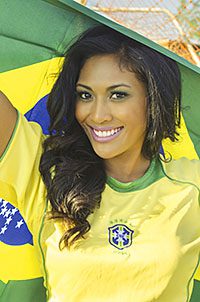 • It might be unlucky for some but Friday 13 June at 8pm serves up a potential cracker with Spain v Netherlands, a re-run of the 2010 final.

• Match of the night on Saturday 14 June at 11pm our time is England v Italy, which is being played in the Arena Amazonia in the city of Manaus, deep in the Amazonian rain forest, just where England football manager Roy Hodgson said he didn’t want to play.

• On Monday 16 June at 5pm there’s the intriguing contest Germany v Potugal, likely to feature many current and recent employees of Real Madrid.

• On Sunday 22 June at 5pm we have Belgium v Russia. Belgium has produced its best squad in many years and is the dark horse bet of many an amateur football pundit.

• The next day is the first to feature final matches in the groups, at which qualifying for the next stage, and whether as first or second in the group, will be decided. And it’s just possible the match on Monday 23 June at 9pm in the Brazilian capital Brasilia Cameroon v Brazil will be important.

• On Tuesday 24 June at 5pm the match Costa Rica v England could be a nail biter. Costa Rica sometimes punch above their weight at World Cups. The Costa Rican team put both Scotland and Sweden to the sword at Italia 90.

• Depending on the outcome of earlier matches in the group, Wednesday 25 June at 5pm UK time could see a crunch match to decide first and second group positions Nigeria v Argentina.

• On Thursday 26 June at 5pm USA v Germany might still have something at stake.

• On Thursday 26 June at 9pm our time Algeria v Russia could be a crunch match.

• Quarter-finals will be played on Friday 4 July and Saturday 5 July at 5pm and 9pm.

• The semi-finals will be played on Tuesday 8 July and Wednesday 9 July at 9pm.

• The final is on Sunday 13 July at 8pm. Brazil will defeat Belgium after extra time. You heard it here first.